“There [is] a role for unconscious will in a theory of decision making… particularly for those objectives that deeply affect our lives.” – Nevin, 1989

“The gross National Product does not allow for the health of our children, the quality of their education, or the joy of their play. It does not include the beauty of our poetry or the strength of our marriages; the intelligence of our public debate or the integrity of our public officials. It measures neither our wit nor our courage; neither our wisdom nor our learning; neither our compassion nor our devotion to our country; it measures everything, in short, except that which makes life worthwhile” – Robert F. Kennedy

The 3rd Nevinomics Principle is: the rules we set – how we construct the economy – depends on what we are trying to accomplish. This principle seems self evident but remarkably seems to have been lost in the economic debates of developed nations. The implication is clear – if Nevinomics is to accomplish its purpose, which is to improve economic policy and decision-making for better economies and societies – it needs to be explicit about what the economy is meant to do for individuals and societies and then measure whether it is, in fact, doing it.

So, what is the economy for? Nevinomics will use Flourishing as the metric of how well an economy is doing and will judge the attractiveness of various policy alternatives and economic prescriptions against the set of criteria that must be met for a society to Flourish.

Flourishing is a concept from Positive Psychology defined as living within an optimal range of human functioning, one that connotes goodness, generativity, growth, and resilience. Nevinomics has chosen as its core objective, then, a concept that captures the full range of human aspirations and recognizes both the need for healthy growth and the essential role that resilience plays in life. Of course, Flourishing is more than just economics, but the structure and performance of the economy are the single greatest factors that create an environment in which people can Flourish. And, just as importantly, Flourishing is now being measured. As shown in chart below, Flourishing in 23 European countries ranges from just over 5%, in Russia, and close to 35% in Denmark. Interestingly, Flourishing is not perfectly correlated with GDP per capita, but is correlated to factors such as education, age, and marital status. 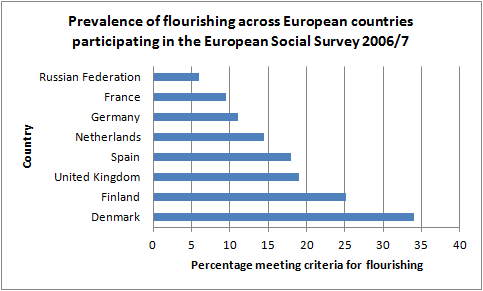 Figure 1: Huppert and So 1)Felicia A. Huppert  and Timothy T. C. So. “What Percentage of People in Europe Are Flourishing and What Characterises Them? ”  The Well-Being Institute (Florence: 2009). Huppert and So

As Nevinomics develops, we will be using the Flourishing lens as the measurement of both how the economy is and has been performing and also as the basis for considering practical steps for evaluating economic policy. Of course, there are many other social and individual factors that influence whether an individual Flourishes; however, Nevinomics believes that the structure of the economy is the single biggest influence on the potential of a society to achieve a high degree of Flourishing. One critical advantage of Flourishing is that it highlights just how far we have to go.

The HDI (Human Development Index) for 2012 had 47 countries in the Very High Human Development category (.80 points or over out of 1), giving a false sense of how the most developed economies are performing for their people. However, when we employ Flourishing as the metric, another reality emerges. Denmark – the best performing country for Flourishing – has an economic system that cannot bring about the Flourishing of even 35% of its people. The US and UK have less than 20% of their people Flourishing. And in Russia just over 5% of people Flourish. With performance like this, we can conclude that national economies – which is the key structure to underpin Flourishing – are not performing anywhere near their potential.

This is what Nevinomics intends to rectify.